For the latest information regarding COVID-19 please visit COVID19.CA.gov.
Announcements

Back to All Blogs

From raising awareness to implementing practice change to supporting the development of trauma-informed networks of care, 2021 has been a successful year for the ACEs Aware initiative. While there is still work to be done, the commitment of an additional three years of Medi-Cal funding for ACE screening included in Governor Gavin Newsom’s proposed 2022-2023 budget provides an opportunity to continue to grow the initiative in 2022 and beyond.

Following are some of the highlights from the past year:

One of the key ingredients in the success of the ACEs Aware initiative has been the ability to direct significant financial resources to communities across California to bring the vision of ACEs Aware to reality. The State of California has invested a total of $45 million in grant funding to support, promote, and advance the initiative. In early 2021, ACEs Aware awarded $30.8 million in grant funding to 35 communities to help them build and augment trauma-informed networks of care. These grants are supporting alignment with best practices, including building cross-sector referral networks, detailed in the Trauma-Informed Network of Care Roadmap. The networks establish formal leadership and accountability structures at the community level, and leverage information technology to build infrastructure through bi-directional referral platforms designed to track the journeys of families through the health and social needs systems. 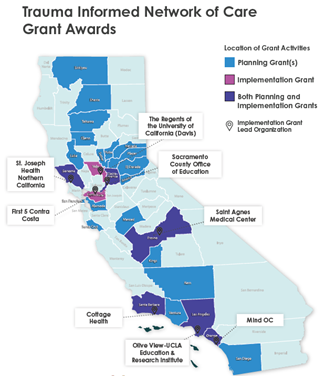 In early 2021, ACEs Aware awarded $30.8 million in grant funding to 35 communities to help them build and augment trauma-informed networks of care.

To learn more about the community grants program and view the excellent work of our grantees, visit the ACEs Aware Grants page.

The core element of the ACEs Aware initiative is the ability of clinical teams to take a free, online training on the fundamentals of ACEs and toxic stress and become certified to receive Medi-Cal payment for screening children and adults for ACEs during primary care visits.

In July, we released data reports highlighting the number of people who completed the  “Becoming ACEs Aware in California” training and documenting the number of child and adult Medi-Cal beneficiaries who have been screened for ACEs. To date, more than 20,500 California clinicians have completed the training, and more than 500,000 children and adults across the state have been screened for ACEs.

One of the goals of the initiative is to broaden clinician engagement beyond primary care settings. Since the launch of ACEs Aware, we have seen significant increases in diversification among provider specialties.

Coping with Toxic Stress During the Pandemic

The ACEs Aware initiative offers many practical applications to address the toxic stress response resulting from ACEs, but we know that toxic stress can occur at any age and for reasons other than ACEs. After witnessing the traumatic loss of his family dog early last year, Orange County pediatrician Dr. Eric Ball shared an intimate reflection on how trauma affects the body and how to build resilience in the face of adversity. Adversity affects everyone, and ACE research shows how the negative effects of stress can be mitigated by supportive relationships and stress-busting techniques, such as mindfulness, healthy eating, and regular exercise.

The events of the past two years have brought the far-reaching impact of systemic racism and inequity into even sharper focus. ACEs Aware has invested resources in exploring the science around exposure to racism and discrimination as risk factors for toxic stress. In April, Dr. Nadine Burke Harris and Dr. Ray Bignall hosted a thought-provoking webinar that examined how exposure to racism and other forms of discrimination can serve as risk factors for the toxic stress response and also contribute to the development of ACE-Associated Health Conditions.

Advancing the State of CAre

To expand the reach and impact of ACEs Aware, we launched our “State of CAre” provider engagement campaign in May, using digital and print media to raise awareness about ACEs and the long-term health effects they can have on children and adults. We used various media platforms to promote our message, including a public service announcement featuring Dr. Nadine Burke Harris that received more than 6.7 million views. We also sent consumer- and provider-facing materials, including an exam room poster in English and Spanish, to more than 90,000 Medi-Cal providers. 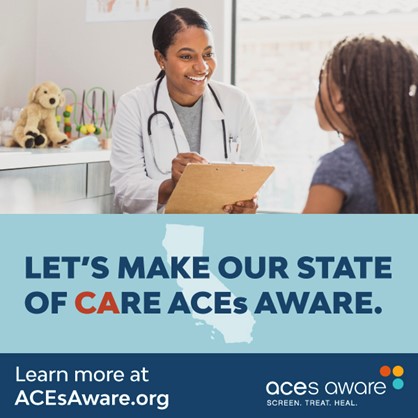 The ACEs Aware “State of CAre” campaign used various digital and print media platforms to raise awareness about ACEs and the long-term health effects they can have on children and adults.

Additionally, ACEs Aware is working closely with the ACE Resource Network to promote NumberStory.org, a resource for consumers to learn more about ACEs, toxic stress, and how to heal. Number Story has generated buzz, enlisting the star power of celebrities like Camila Cabello, John Legend, and Oprah (to name just a few) who have joined Dr. Burke Harris in promoting understanding of ACEs and to normalize conversations about mental health.

In 2022, the ACEs Aware initiative is moving to a new organizational home within the newly created UCLA/UCSF ACEs Aware Family Resilience Network (UCAAN) that will continue to develop, promote, and sustain methods to screen patients for ACEs and advance evidence-based treatments for toxic stress.